I have more notes from Velocity, but thought I’d do DevOpsDays first while it’s freshest in my brain. This isn’t a complete report, it’s just my thoughts on the parts I felt moved to actually write down or gave me a notable thought. More notes when I was learning, less when I wasn’t (not a reflection on the quality of the talk, just some things I already knew a bit about).

DevOpsDays Silicon Valley 2014 was June 27-28 at the San Jose Computer Museum. 500 people registered; not sure how many showed but I’d guess definitely in excess of 400.

State of the Union

First we had John Willis (@botchagalupe) giving the DevOps State of the Union. Here’s the slides (I know it says Amsterdam, he gave it there too.) This consisted of two parts – the first was a review of Gene Kim et al’s 2014 State of DevOps Report – go download it if you haven’t read it, it’s great stuff.

The second part is about how we are moving towards software defined everything – robust API driven abstractions decoupled from the underlying infrastructure. John’s really into software defined networking right now as it’s one of the remaining strongholds of static-suckiness in most infrastructures. A shout out to the blog at networkstatic.net and tools like mesos and Google’s kubernetes that are making computing even more fluid (see this article for some basics). “Consumable, composable infrastructure.”

Next, our favorite Kanban expert Dominica DeGrandis (@dominicad) spoke on “Why Don’t We Just Say No?”  Here’s the slides. As a new product manager, and as a former engineering manager who had engineers that would just take on work till they burst even with me standing there yelling “No!  Don’t do it!”, it’s an interesting topic.

Why do you take on more work than you have capacity to do? She cites The Book Of No by Susan Newman, Ph. D and a very recent Psychology Today “Caveman Logic” post called Why So Many People Just Can’t Say No. She proposes that it is easier for devs to say no; ops have more pressing demands and are forced into too much yes. Some devs took exception to this on twitter – “our product people make us do all kinds of stuff we don’t like to” – but I think that’s different from the main point here. It’s not that “you have to do something you don’t like and are overruled when you say no” but that “you become severely over-committed due to requests from many quarters and being unwilling to say no.”

She goes through a great case study of changing over a big ops shop to a more modern “SRE” model and handle both interrupt and project work by getting metrics, having a lower WIP limit, closing out >90 day old tickets, and saying no to non-emergency last minute requests. In fact, the latter is why I prefer scrum over kanban for operations so far – she contended that devs have an easier time saying no to interrupt work because of the sprint cadence.  OK, so adopt a sprint cadence! Anyway, by having some clear definitions of done for workflow stages they managed to improve the state of things considerably. Use kaizen.  The book about the Pixar story, Creativity Inc., talks about how the Pixar folks were running themselves ragged to try to finish Toy Story, till someone left their baby in a car because they were too frazzled. “Asking this much of people, even when they wanted to give it, was not acceptable.” What should your WIP level be? The level of “personal safety” would be a great start!

It’s interesting – I did some of these things at Bazaarvoice and tried to do some other ones too. But often times the resistance would be from the engineers that the current process was working to death.  “We can’t close those old tickets!  They have valuable info and analysis and it’s something that needs to happen!” “Yes, but our rate of work done and rate of work intake proves mathematically that they’ll never get done. Keeping them open is therefore us making a false promise to whoever logged those tickets.” Not everyone is able to ruthlessly apply logic to problems – you’d think that would be an engineer attribute but in my experience, not really any more than the general population. But given that “not acceptable” quote above, I really struggled with how to get engineers who were burning themselves out to quit it.  It’s harder than you’d think.

Next was a fascinating case study from Capital One’s transformation to an agile, BDD, devops-driven environment given by Adam Auerbach (@bugman31). The slides are available on Slideshare.  They used the Scaled Agile Framework (SAFe) and BDD/acceptance test driven development with cucumber as well as continuous integration. In a later openspace there were people from Amex, city/state/federal governments, etc. trying to do the same thing – Agile and DevOps aren’t just for the little startups any more! He reported that it really improved their quality. Hmm, from the Googles it looks like the consulting firm LitheSpeed was involved, I met one of their principals at Agile Austin and he really impressed me.

Sales and Marketing Too

Sarah Goff-DuPont (@devtoolsuperfan) spoke about having sales and marketing join the agile teams as well.  Some tips included cross-pollinating metrics and joining forces on customer outreach.

Just some quick thoughts from the day one Ignites.

If you haven’t done openspaces before, it’s where attendees pitch topics and the group self-organizes into a schedule around them. Here’s some pics of part of the resulting schedule: 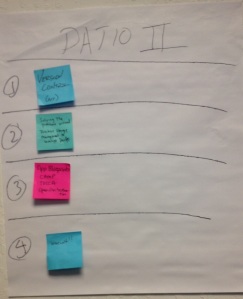 I went to two.  The first was a combination of two openspace pitches, “Enterprise DevOps” and “ITIL, what should it be?”  This was unfortunately a bad combination.  Most folks wanted to talk about the former, and the Capital One guy was there and people from Amex etc. were starting to share with the group. But the ITIL question was mostly driven by a guy from the company that “bought ITIL” from the UK government and he had a bit of a vendory agenda to push.  So most of the good discussion there happened between smaller groups after it broke up.

The second was a CI/CD pipeline one, and I got this great pic of what people consider to be “the new standard” pipeline.

All right, I’m here in sunny San Jose for Velocity, the three-day Web operations and performance conference.  It’s my first time attending as a sponsor type which is interesting. We have a whole cadre going; I flew in with Jenny and Lauren from Copperegg as part of the advance squad.  Because I just got in on this gig recently, I am out at the Avatar while they’re at the Hilton nearby.  On the cab ride, they got a bit agitated over a tweet claiming we’re being exclusionary over our “The Dude” promos; I guess I can see the misunderstanding but it’s a Big Lebowski theme specifically cooked up by the women in our Marketing department.

Some IHOP breakfast, a long walk from the Avatar to the convention center, and then speaker checking, where I got to chat with Mandy Walls, Vladimir Vuskan, and Andrew “Clay” Shafer.  Apparently there’s a two person limit on booth setup so I don’t have to help with that. I’ll go report on Andrew’s talk, though will have to duck out early for speaker orientation for my talk.

Remember, if you can’t make it they’ll be streaming the morning keynotes on Wed/Thurs.  If you are here, grab me and say “Hi!”

Three of the four agile admins (James, Karthik, and myself) will be out at Velocity and DevOpsDays this week. Say hi if you see us!

James will be doing a workshop with Gareth Rushgrove on Tuesday 9-10:30 AM, “Battle-tested Code without the Battle – Security Testing and Continuous Integration.” Get hands on with gauntlt and other tools! [Conference site] [Lanyrd]

Ernest is doing a 5 minute sponsor keynote on Thursday, “A 5 Minute Checklist for Application Monitoring.” OK, so it’s during the USA vs Germany game – come see me anyway!  I hate keynote sales pitches so I’m not doing one, I’ll be talking about a Lean approach to monitoring and stuff to cover in your MVP. There’s a free white paper too since what can you really say in 5 minutes? And so you know what to expect, the hashtag you’ll want to use is #getprobed! [Conference site] [Lanyrd]

Monitoring and the State of DevOps

If you haven’t read the new  2014 State of DevOps Report from Puppet Labs and other luminaries, check it out now!

I also pulled out some of their findings on monitoring to inspire a post for the Copperegg blog, Monitoring and the State of DevOps, which I thought I’d mention here too.