DevOpsDays Austin was back in person in 2022 for our 10 year anniversary! So how’d it go? We are committed to transparency and metrics here so enjoy our retrospective.

Financially it went well; we sold 317 tickets and had 296 people show up (an almost unheard of 93% show rate), we were able to donate $28,000 to support the LGBT+ members of our community via Out Youth and The Trevor Project, bringing us to $100,000 donated to charity total over the history of the event, and still ended up with a $1000 increase in our bank account.

We also send out retrospective surveys to our attendees, speakers, sponsors, volunteers, and even our fellow organizers to find out how we’re doing and get an idea of what we should do better on (or keep doing) in the future!

Here’s the deeper details if you want them: DevOpsDays 2022 Retrospective

To sum up, however, it’s looking good! Our last surveys were from 2019, from our last pre-pandemic DevOpsDays Austin, so we have a previous number to compare to.

Our attendee NPS was up to 77 (44 responses) from 62 (50 responses). And the things people loved were, basically, the personal interaction. Community, people, discussions, and openspaces were the most cited positives by far. We knew people had been missing that for a couple years now so our retrospective format and event plan were specifically designed to promote small group interactions.

The gripes were more varied. Primary was the food, which is fair enough. While we don’t intend to change from a boxed lunch format – it leaves so much more time for the actual conference, so we left fancy catered lunches behind long ago – we were forced to use the venue caterer and they ran out of food especially veggie options, and we had asked for breakfast tacos both mornings and on day two the breakfast was what I can only call “leftover meat bits.” So room for improvement, with the understanding that boxed lunches are here to stay, but we’ll definitely see what we can do about better options and especially making sure there’s not shortages of anyone’s dietary needs.

The other leading concern we’re just plain going to ignore, and here’s why. It was “the retro format – but what about technical talks, what about content for newbies?”

At DevOpsDays Austin we explicitly reject the assumption that all events must be the same generic thing every time. We specifically change our format every year. We’ve had the Monsters of DevOps where we went for flying in big keynoters (including all the authors of the DevOps Handbook) and doing everything up huge; we’ve had DevOps Unplugged where talks were voted in on site and there were no sponsor tables. This year we had a “class reunion” format with talks only being 20 minute “retrospectives” from what the speaker’s learned over their time in DevOps (some speakers were experienced, others were new voices). We very, very clearly talked about this format on our website, social media, and emails to attendees and sponsors. In the end, people just don’t read, and there’s nothing really to do about that. And we won’t be doing the retro format two years in a row, we’ll keep mixing it up!

Organizer feedback was good (we have 20 organizers), up slightly, with everyone enjoying working with the group, and some concerns about unclear roles and roles already taken. That’s always a challenge – we have a lot of organizers but not all of them are up to actually leading something. We have people volunteer to own roles and then encourage them to reach out to the others/the others to chip in when we need something, but that doesn’t always go well, which is frustrating for everyone. In the end, most roles need someone who can commit to consistent participation over the planning period (there’s a couple specialty roles like making signage that can be backloaded, but not many). But we want to be inclusive and not tell people “no, take the year off if you can’t be putting in a couple hours a week including making the organizer calls, and truly own something.” We’ve wrestled with this for 10 years, no clear answer is in sight.

Speakers love speaking at the event. NPS was 92, slightly up from 90 in 2019. They love the audience, how supportive and welcoming they are, and how low stress and chill the experience is. There’s always some AV issues as a fly in the ointment – we do AV checks but not everyone shows up for them.

Volunteers have a good experience too. NPS was 88, slightly down from 94 but still good; we try to make sure that the load isn’t too much on any given volunteer so they can also enjoy the event. Posting the openspace topics is always a challenge each year; we tweet out photos and then desperately type them into the sessionize, but a bunch of attendees are social media impaired I guess and it’s hard to get the schedule to everyone, but there’s not a lot of options given that openspaces are predicated on doing the agenda immediately previous; I’m not sure more time would help short of printing out copies or having live monitors everywhere.

Sponsor feedback was down from 60 to 50 NPS. They do like the audience and authentic content. The main problem was the new venue and unclear flow meant that the platinum sponsor rooms were more out of the way than we’d planned (we gave them tables in the gold area as well once this became clear). And then the general sponsor gripes about it not being a good lead gen event. We always tell sponsors this is a good participation event, not a good lead gen event, no badge scanners, no sponsor list, etc., but a previously mentioned people don’t read, plus the teams being sent out aren’t the people buying the sponsorships and often just assume they’ll be getting a standard conference experience. We sell out every year so I’ll worry about it when that stops.

There’s one other thing worth mentioning, which is that we did require masking at the event and asked people to either be vaccinated or test prior to the event.

One the one hand, a couple sponsors and attendees griped about the masking.

On the other hand, despite other events resulting in superspreading (Kubecon EU, RSA, even some DevOpsDays events): 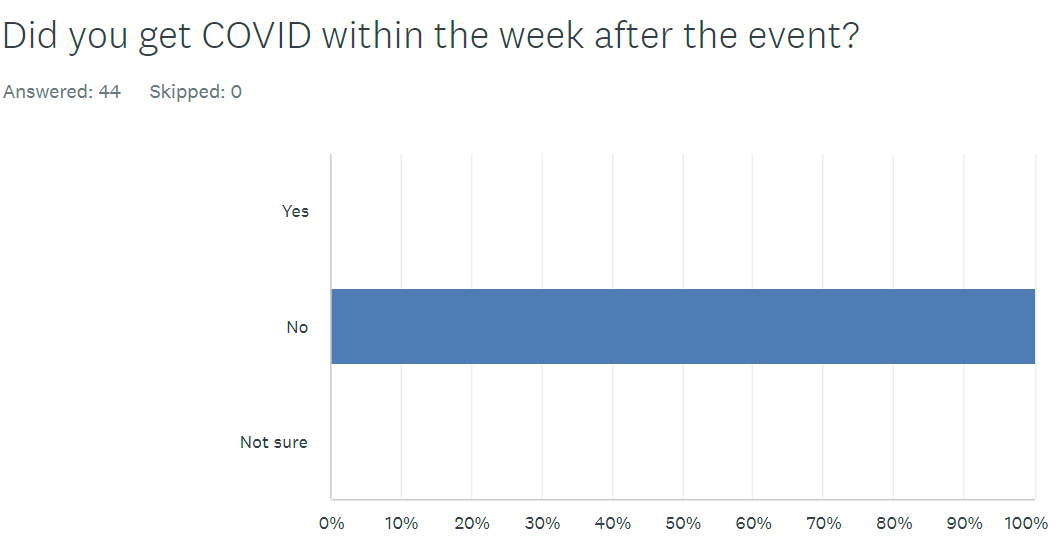 So, with all due respect, we are very happy with our choice and that we had a safe event. No one likes wearing masks. If you don’t like it enough to not come – don’t come. Hopefully it won’t be necessary next year.

Everything was pretty good! There was one issue, though – in all the survey sub-questions, there was a drop in the perceived friendliness of the organizer team, so we’re going to make some changes there – stay tuned to hear what!