I thought I’d take a minute for a teambuilding tip from Management Corner and share a winning teambuilder from here in Austin that I’ve used a lot and has always been a solid success. We call it “Meat, Guns, and Booze.” Steal it and use it with your teams!

Coming up with good teambuilders for an engineering team is pretty difficult.  You have a mix of introverts and extroverts. Going to a movie doesn’t really allow for much personal interaction.  A group meal lets you talk to the 3-4 people next to you, which in large groups isn’t a large percentage, and even getting everyone seated together can be a challenge.  Not everyone drinks and may not appreciate hanging out at a bar. Messing around in the office is fine but sometimes you want to get out of there so that people aren’t continually distracted by work. Not everyone is active enough for something like paintball (especially in Texas weather!). Well, back some years ago while I was at National Instruments we were mulling over what a good field trip/teambuilder could be given all these limitations, and happened across a winning combination that never fails to deliver!

First, head out to Lockhart, about an hour from most places in Austin, for a lunch of barbeque. Austin BBQ is good, but for the truly top tier stuff you have to go out to other locations (we love Franklin’s/LA Barbecue but going and standing in line at 10 AM to get some isn’t really a team activity). You can have internal debates over whether you go to Black’s, Smitty’s, or Kreutz’; try them all out over time as everyone will passionately defend the one they think is best. For vegetarians, there’s good sides, but also there’s a cafe right across the street from Smitty’s Market with salads and whatnot. Smitty’s also has a “no utensils” rule; eating meat with your hands definitely switches the mood to informal and friendly quickly!

Pro Tip: Bring cash. Some of them – Smitty’s for sure IIRC – don’t take credit!

Besides the great BBQ, many folks haven’t seen old style rural Texas – even folks living in Austin, but especially people from other countries. I remember once we were headed into town, and it has a traditional town square with raised boardwalks and all – and the two guys from Ukraine in the back seat started wriggling around like itchy bear cubs and talking rapidly to each other in Ukranian.  “What’s up?” I asked from the driver’s seat.  “It looks just like Fallout!” they breathlessly exclaimed. I had to laugh. It’s worth a brief stroll around the town square and courthouse. There’s a western-stuff store for the greenhorns, too. 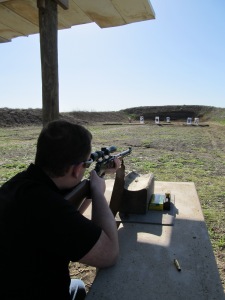 A Ukranian Engineer Learns About Texas

If it’s raining, you can fall back to Red’s in Austin, they have several locations.  But they’re small and cramped for groups. Right near Lockhart is the Lone Star Gun Range. They have rifle and pistol ranges, outdoor but with shade.  You just need a driver’s license (or passport for the foreigners) and you can rent anything from a revolver to an AK-47 for a reasonable fee – you mainly end up paying for ammunition. (You can bring your own guns and ammo, but have to buy their ammo to use in their rental guns.) They give a quick safety briefing and off you go.  As long as you have one or two more gun-savvy people to help folks who are having trouble figuring out how to reload or whatnot, you’re good to go; I’ve been there many times with groups of 10-20 composed of mostly noobs with no problems. And don’t worry – everyone gets into it.  I’ve had people who were initially intimidated but once they get hands on for a minute they always take to it with gusto.

Pro Tip: Don’t drive a super-nice car – the road to the place is not paved, it’s shell.  If you have a sweet hand-waxed Porsche you should ask someone else to drive. Also, it’s outside in Texas in (whatever season) – bring sunscreen, hats, and a cooler full of water. There is an air-conditioned store with a bathroom and all if someone gets overwhelmed by the heat.

Sad Note: They used to have a Barrett .50 out there at Lone Star but they sold it.  The rounds were super expensive but no one wanted to fire more than 1 or 2 anyway! But they have revolvers, automatics, rifles from .22 to ARs to AKs…

After shooting, you’re usually hot, and so stopping in at a watering hole on your way back to Austin is a good thing to do.  Anywhere that’s convenient for you is good – I’ve done the Whip In as that’s uber Austiny, has an outdoor patio with picnic tables for good social mobility, and has a lot besides just beer (food, wide non-alcoholic drink variety). You got out of the office (and out of town), had the team nourish itself on food, then have an exciting activity, and now they get to interact with the ice already well broken. People don’t drink a lot because it’s already been a long day, as opposed to a “let’s go drink” teambuilder where people are more tempted to overindulge. But they have plenty to talk about. Non-drinkers – or if your entire company doesn’t like sponsoring events with alcohol – can just drink sodas and have an appetizer or two to unwind.

And yes, to all the wags out there who inevitably respond with “but don’t mix up the order!”, you do want to do it in this order – there’s the wisdom of no drinking before gun handling, but also because this sequence of events is carefully constructed to provide a cadence of icebreaking and interaction. You “break bread” together, which is a universal signal of togetherness, and sit by some people to eat, by others in the car, interact with others while doing a stimulating activity, unwind with others after, etc. And since it’s multipart, if someone really does have to come late or leave early there are multiple natural breakpoints. We also like doing three-round K1 racing as teambuilders but that’s more disruptive if people come and go.

I’ve used this teambuilder with multiple teams, multiple companies, and it’s always a hit. It’s especially a hit with international teams – folks from Malaysia, Ukraine, etc. see all of this as a special treat; it’s very common to talk to them a year later about their trip to Austin and they’ll immediately volunteer that this was their favorite part of their visit hands down. It’s relatively inexpensive and just takes a long afternoon (we usually leave at 11 and start wrapping up at 5). It’s maybe $1000 for a full day of fun for a dozen people.

Well of course the luridly titled “Meat, Guns, and Booze” specifically evokes Texas and is tuned to our location.  But consider the same kind of event cadence and think about what’s distinctive in your area. You just want the team to share a meal, then participate in an activity that everyone can easily participate in, and then have an opportunity to relax and talk with each other afterwards.

4 responses to “Steal This Teambuilder: Meat, Guns, and Booze”